The procedures and standards for testing electrical contacts described below are mostly concentrated on contact applications in electromechanical devices. Since the range of applications for electrical contacts is very broad, a complete description of all relevant test procedures would extend the scope of this chapter of the Data Book. Therefore we limited the content here to contact coatings and switching contacts for information and power engineering. Because of the ongoing miniaturization of electromechanical devices the testing for effects of corrosive influences by the environment play an important role. Special testing procedures, such as these for brazed, soldered, and welded contact joints are covered already in chapter 3 Manufacturing Technologies for Contact Parts

Every technical device has to fulfill a series of requirements. Some of those which are important for agreement between contact manufacturer and user are part of DIN 40042 standard and described here in a summarized version:

Reliability describes the system's ability to fulfill at any time the requirements of an application within pre-defined limitations.

Both, availability and reliability, are guaranteed for a pre-determined time span and/or a specific number of switching operations. This means they warrant the life expectancy of a switching device. At the end of the live span the failure rate exceeds pre-defined limit values.

Electrical life is the number of operations reached under a given electrical load under specified operating conditions. Since the criteria which determine the electrical life of switching contacts depend on the type of switching devices they are used in, they are described in more detail under the testing procedures in information and power engineering.

For applications at low switching loads contact layers with thicknesses in the range of just a few micrometers are widely used. For testing such thin layers the actual coating properties must be distinguished from the functional properties. Coating properties include, besides others, porosity, hardness, and ductility. Depending on the application, the most important function properties are for example frictional wear, contact resistance, material transfer, or contact welding behavior. Besides these other technological properties such as adhesion strength, and solderability, maybe of importance for special applications like those for electronic components.

The following descriptions are mainly applicable to electroplated contact coatings which are of the most economical importance in contact applications. They also apply however in similar form to surface layers which have been created by mechanical cladding or by sputtering.

Test Procedures for the Communications Technology

Testing of the contact behavior in the communications technology is usually performed on the actual devices such as for example in relays. Experience has shown that the interaction between all design and functional parameters such as contact forces, relative movement, and electrical loads, are determining the failure mode. Therefore only statistical performance tests on a larger number of switching devices lead to meaningful results.

One must differentiate between static tests (for ex. contact resistance) and dynamic ones (for ex. electrical life). In certain electromechanical components and switching devices the contacts can be exposed to both, static and dynamic stresses (for ex. connectors, relays, switches, pushbuttons, circuit breakers). For statically stressed components the life expectancy is usually expressed as a time period, i.e. hours, while for dynamically stressed ones the expected functional life is defined as numbers of operations or switching cycles.

The testing of electrical contacts for power engineering applications serves on the one hand the continuous quality assurance, on the other one the new and improvement development efforts for contact materials. To optimize the contact and switching performance contact materials and device designs have to complement each other. The success of such optimizing is proven through switching tests.

The assessment of contact materials is performed using metallurgical test methods as well as switching tests in model test set-ups and in commercial switching devices. While physical properties such as melting and boiling point, electrical conductivity, etc. are fundamental for the selection of the base metals and the additional components of the materials, they cannot provide a clear indication of the contact and switching behavior. Metallurgical evaluations and tests are used primarily for determining material and working defects. The actual contact and switching behavior can however only be determined through switching tests in a model switch or preferably in the final electromechanical device.

Model testing devices offer the possibility of quick ratings of the make and break behavior and give a preliminary classification of potential contact materials. Since such tests are performed under ideal conditions they cannot replace switching tests in actual devices.

The following chapters are limited to metallurgical analysis and the testing of the most important properties of switching devices such as electrical life, temperature rise, and switching capacity.

The definition of corrosion can be found in DIN 500900 Part 1 as follows: Reaction of a metallic material with its environment, which produces a measurable change in the material and can lead to corrosion damage. This reaction is in most cases an electrochemical one. It can however also be based on chemical and metal-physics effects.

During corrosive influences metal is dissolved. This metal loss can be uniformly spread out over a certain area or be limited to locally smaller spots. This process usually proceeds with constant speed up to the total material loss, or after certain reaction times a natural corrosion limiting surface layer can be formed (i.e. on aluminum).

The following pages describe test methods and procedures which are mainly related to the effects of environmental exposure of electrical contacts which are used in contact components for the telecommunication and information technology. Corrosion products on the surface of electrical contacts can reduce the reliability of contact making significantly by, for example, higher contact resistance, which will negatively affect the transmission of current and data signals. This can cause major problems in electromechanical contact components used in the information processing technology. Causes for the formation of tarnish film on electrical contacts include for example the presence of corrosive gases such as H2S, SO2, NOx, O3, Cl2, and NH3 Table 2 in industrial environments.

Corrosion tests – also called environmental – on electrical contacts in natural environments must be critically evaluated, because they are the rather time consuming.

During different times of the year temperature and relative humidity changes as well as changes in the concentration of corrosive gases can have significant influences on the formation of corrosion products.

Therefore research and quality assurance efforts have centered for many years on developing test methods for electrical contacts which can predict in an accelerated time frame the corrosion behavior of electrical contacts in different corrosive atmospheres with reasonable accuracy.

The differences in the corrosive gas concentrations and the test durations are dependent on the end application of the contact components and the assessment of the exposure parameters. Battelle (the Battelle Institute) has, for different applications, defined four climate classes which reflect the corrosion behavior of porous electroplated gold surfaces. Such gold layers are often used in connectors for the telecommunications and information technology Table 4, Figure 1.

Table 4: Classification of Corrosion Effects According to Battelle

The dominant corrosion effects for thin gold coatings are pore corrosion and at higher gas concentrations creep corrosion from the base materials onto the coating starting at the boundary line between non-precious base metal and contact layer. 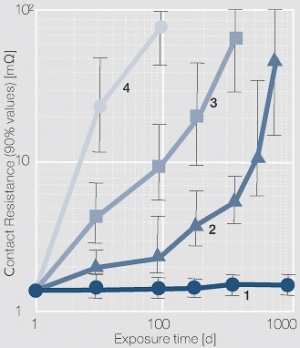 The measurement of contact resistance allows an indirect classification of corrosion product layers. While the analysis of thicker corrosive product layers in the range of 0.1 – 1 μm can be performed by classic methods such as SEM and X-ray microprobe, thinner layers of 10 – 100 nm require the use of ionoptical analysis equipment.

I Data Book I Testing Procedures I

Cosack, U.: Survey of Corrosion Tests with Pollutant Gases and their Relevance for Contact Material. Proc. of the 13th Intern. Conf. on Electr. Contacts, Lausanne, Switzerland, (1986) 316-325